A group of deeply concerned people is taking an unprecedented step in releasing a video of children behind bars to show the shocking effects of Australia’s harsh detention policies. We ask the Australian people a simple question “Are you really ok with this?”

The Refugee Advocacy Network (RAN) is a broad based group with members from Church and Community Groups who share a common concern about Australia’s current refugee policy. The children in this video have been locked behind fences and bars because their parents arrived by boat. Some are stateless, some are born in Australia, and all are suffering at the hands of the Australian government in a prison environment.

The Minister announced this week that he will release 150 children over the next five months. Some of these 150 children have been held in detention for up to two years and should have been released in accordance with existing government policy long before now.

Despite this welcome announcement, there will still be hundreds of children living in appalling conditions in offshore camps on Christmas Island and Nauru. Many of these families have fled life threatening situations, and have suffered years of uncertainty and danger, only to be told they will never be resettled in Australia.

Children in detention are denied the home environment, emotional security and confidence in the future which are so important for their health and development. They are missing out on schooling, and the normal activities and opportunities which all loving parents want to give their children. We know that many Australians are shocked that the Australian Government is doing this to children and vulnerable people.

“For too long this brutal treatment of children has been kept secret by governments pretending to protect children. The evidence given by medical professionals and staff from detention centres to the Human Rights Commission Inquiry into Children in Detention has exposed the cruel treatment meted out to children in detention where every aspect of their lives, from the food they eat and the huts and tents in which they try to sleep is ruled by government policy”, says Pamela Curr of RAN.

“We seek to live in a society that is shaped by compassion and justice for all people including those seeking asylum in Australia” says Sister Brigid Arthur of RAN. “It is not illegal for people to seek asylum in Australia, regardless of how they arrive. It is for this reason that we are releasing this video with the faces of children suffering because of our harsh refugee policies.” 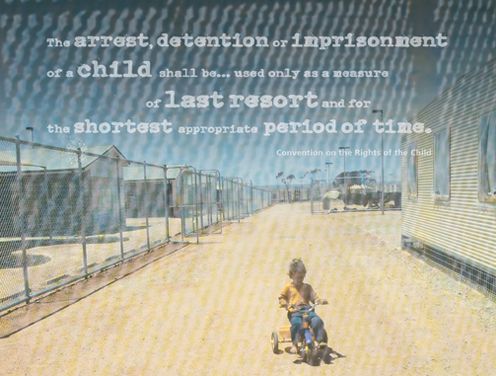