16 Days Campaign Against Violence Against Women

Around the world millions of women and girls are subjected to some form violence every day. Human trafficking is an extreme form of violence against women and girls. We invite you to join us in the UN 16 Days Campaign Against Violence Against Women from 25 November – International Day for the Elimination of Violence Against Women and the anniversary of the brutal assassination of Patria, Maria and Minerva Mirabal Reyes, three activists in the Dominican Republic in 1960, to 10 December, the day the world marks as International Human Rights Day.

The following resource from ACRATH (Australian Catholic Religious Against Trafficking in Humans) is offered for awareness raising, discussion, reflection and action during the 16 Days Campaign Against Gender Based Violence. We encourage you to print off a copy of the following sheet with a thought for each day to include in your prayer before the family or community meal, during Morning or Evening Prayer etc.

16 DAYS OF ACTIVISM AGAINST GENDER BASED VIOLENCE 2019

“It is not possible to remain indifferent before the knowledge that human beings are bought and sold like goods!”  Pope Francis 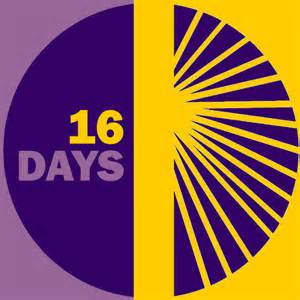