11 ACRATH advocates were in Canberra for advocacy from 17 to 21 November. They stayed at the former Brigidine convent.
Training and preparation was held on Sunday night.
In Parliament, teams of two or three formed for meetings.
ACRATH acknowledged the bipartisan support for policy work on human trafficking. We believe effective legislation has grown out of the genuine collaboration between government and civil society. The process has included frank dialogue as well as formal national round tables at which stakeholders have furthered policy work.
ACRATH began work in 2005. To support our funding request, we pointed out our highlights for 2013:

We raised the following points: 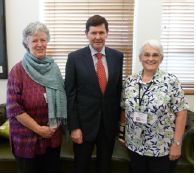 Outcomes from the Advocacy week

ACRATH, and a number of colleague NGOs, have long been concerned about visas and Social Security entitlements for people trafficked into Australia. In this advocacy week ACRATH met separately with Social Services Department officials, the Social Services Shadow Minister and the Social Services Minister. This run of meetings was followed up at the National Roundtable on Human Trafficking in Sydney which happened to be planned for the Friday of our advocacy week; at the Roundtable we were able to take our advocacy point a step further; a teleconference of key people is now being planned.
In Canberra we took the unusual step of advocating for funding for our own organisation. 23 MPs agreed to contact the Attorney General and the Minister for Justice in support of our funding request. Some of our team drafted a letter of support and got it back to those MPs before we left Canberra.

In Canberra the team discussed the status of the recommendations from the Report of the Parliamentary Human Rights Sub-committee; ACRATH is now developing a plan to build on those very worthy recommendations.
By the end of the week, the team have compiled a 30 page follow-up document which records every meeting we had, any follow-ups we promised to undertake, and any links we can build on into the future. In planning this year’s advocacy we used three follow-up documents we had compiled in the previous few years; these provided invaluable background resources for the team. Among the follow-ups are an invitation to attend a new MPs maiden speech in parliament and to work with an MP on a forum in regional NSW. 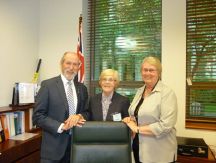