In Randwick on 19 February Catholic Religious and colleagues heard case studies of young Australian women forced into marriage in their parents’ home countries. They heard that new Australian legislation will criminalise forced marriage and empower the young women threatened with forced marriage. 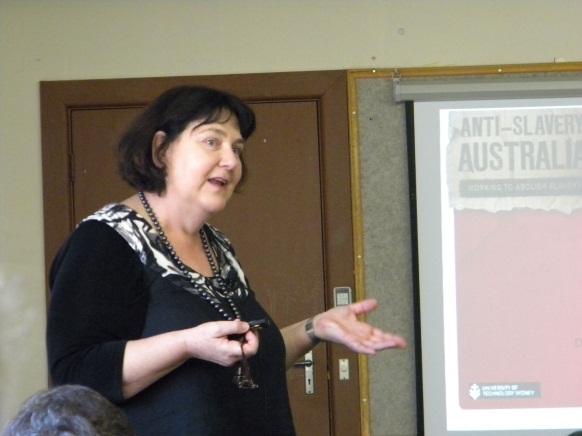 Speaking on this topic was Associate Professor of Law at UTS, Jennifer Burn, a keynote speaker at the annual national conference of ACRATH, Australian Catholic Religious Against Trafficking in Humans.

A second key theme of the conference was labour trafficking and forced labour in various Australian industries, especially agriculture, construction and factory work. Bob Kinnaird, National Research Director of the CFMEU National Office, gave a presentation The changing immigration context: how labour trafficking is made easier to conceal. Bob described the vulnerability of the 1 million people in Australia on temporary visas (excluding New Zealanders).Bob said many of these temporary visa holders became captive and compliant labour for unscrupulous employers. He is very keen that the Australian community becomes more aware of this exploitation of vulnerable people.

The conference was held from 18 – 20 February at The Centre in Randwick, an eastern suburb of Sydney. Forty-one ACRATH members, from almost all states and territories, were joined by two Catholic sisters from the newly formed NZRATH – NZ Religious Against Trafficking in Humans. The NZ sisters spoke of recent Auckland university research ‘Out of Sight, Out of Mind’ concerning the trafficking of men onto foreign flagged fishing vessels in NZ waters. The conference also worked on developing further ACRATH collaborations with colleagues in the Asia Pacific region and around the globe.

ACRATH has long been concerned with establishing slave-free supply chains for goods brought into Australia. So it was with great gusto that conference participants ate their Nestlé chocolates on Tuesday night celebrating that day’s announcement by Nestlé that all Nestlé goods made in Australia and NZ are made using certified ethically sourced cocoa.

ACRATH members spent the final day of the conference planning national action, and action in their own regions. ACRATH members are challenged by the expanding vision of the work to be done and the need to find more resources to help address these emerging needs. The conference was book-ended by ACRATH national chair, Sr Maree Marsh csb who challenged the conference to see our work in the light of Mary Robinson’s human rights challenge – Everybody Matters.

For more information, contact Christine Carolan at the ACRATH national office – projects@acrath.org.au or 0427 302 755