Sister Elise García, 70, is the newly elected president of the (LCWR) Leadership Conference of Women Religious, the national organization that represents 80% of women religious in the United States. Elise, an Adrian Dominican Sister, joined her community at the age of 50 after years of interest and work with social justice issues, advocacy and nonprofits and with, a keen lifelong concern for the fate of the planet.

As García moves from president-elect to president, she says she’s most excited to see what it is that women religious can “draw from our religious imaginations.”

“I do believe that the wisdom is not in any one of us. It’s in all of us coming together across cultures, across race lines, across all of our differences,” she said. “That is the future that is beckoning us, and I’m excited about moving in that direction.”

Elise’s personal story and her vision of religious life for women today is inspirational and can be read at https://www.globalsistersreport.org/sr-elise-garc-bridge-sisters-younger-and-older-she-assumes-lcwr-presidency 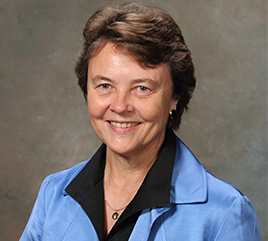