A DERRY businessman, and a charity worker who had been shot in the face and permanently blinded by a British soldier when aged ten, were the speakers at the AFRI conference at this year’s Feile Bhride. It was the first time the two have spoken at a public event since meeting four years ago. 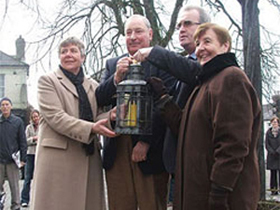 The flame of Brigid is handed over to Charles Inness and Richard Moore by Phil O’Shea and Mary Minehan at the beginning of the Afri Conference.

The indomitable human spirit can often confound us in its power and ability to inspire. Such is the case of Richard Moore who, amazingly, despite being blinded by a rubber bullet at the age of ten, has  never wallowed in bitterness or hatred. ‘I learned to see life in a different way’ is how he describes his remarkable acceptance of circumstances that would plunge most people into understandable despair, bitterness and desire for revenge. Not only did Richard accept his blindness but he had an abiding ambition to meet the soldier responsible for firing that rubber bullet on that fateful day. He persevered in his quest until he succeeded and Charles, the soldier, joined Richard on stage at the AFRI conference during a very moving and inspiring session entitled: ‘Transcending Conflict: Freedom in Forgiveness’.

Richard and Charles told their inter-twining story highlighting the consequences of war and conflict. Richard also went on to talk about his work in Development in Tanzania and Ethiopia and the importance of achieving the UN Millennium Development Goal of reducing by half the number of people suffering from hunger by 2015. 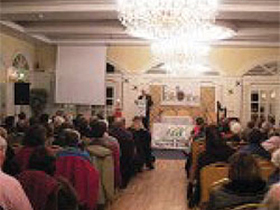 Richard spoke of waking up on a school table after being shot, of his fortnight in hospital, of being told by his older brother he would never see again and how, perhaps too young to be angry, he “accepted it just like that”. He was “very lucky” his family expressed no anger, and he was able to avoid being consumed by bitterness.

Charles said he “felt dreadful” when told a day later his actions had injured a boy. He was thirty, and had children. “Like anything, with the benefit of hindsight, I would never have fired that shot if I had known what would happen.” Both men have now embarked on a journey of friendship together and they hope they can become a symbol of reconciliation and peace to many who have suffered during times of war. 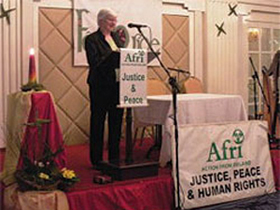 Richard went on to learn Braille and touch-typing, to finish school and study social administration at university. He bought two pubs in Derry with compensation from the British army. He then sold these and founded, in 1996, the Children in Crossfire organisation which supports children in poverty across the world.

In interviews, he expressed a wish to meet the soldier who shot him. A documentary-maker tracked the soldier down in Scotland, and a meeting was arranged. The meeting in 2006 was “incredible” and “magnificent”, they said. They have remained good friends. Richard said though he had forgiven the soldier many years earlier, it was important to tell Charles in person. “Sometimes things happen that cannot be explained. In Northern Ireland, certainly things happened that would not have happened in a normal society. The innocent suffered most . . . But if we can manage to rise above our experiences, and forgive . . . forgiveness is not for the other person. It’s a gift to ourselves.”

Adapted from The Irish Times and AFRI website Feb 2010

The conference celebrated the wonder of our Universe, captured remarkably in the film ‘The Awakening Universe’, and through the reflections of Nellie McLaughlin rsm whose book ‘Out of Wonder’ is also a celebration of the incomprehensible beauty, intricacy and vastness of the Universe.

Call for people power to save the Curragh from destruction 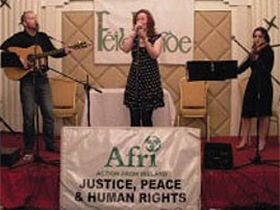 Academic and writer Dr John Feehan of the School of Biology and Environmental Science in UCD led a walk on the Curragh plain which was organised as part of Féile Bhríde. “This is the largest area of unenclosed lowland grassland in the country and this is important because of the flora and fauna which are unique to the area. There is documentary reference to the Curragh as a commonage going back to the 13th century and the reason it is commonage is that in prehistoric times it was a meeting place for the people of Leinster who assembled every two years and that’s a big deal. Games were also played here and that is how it is where horseracing is held. There was also a lot of business transacted here and this makes it a place of rich archaeological heritage.”

Dr Feehan says that the age old assumption that the Curragh has always been a pasture plain untouched by plough of any kind is untrue and that it was a place where corn was cultivated in what were known as lazy drills.

“The presence of these ridges predates the use of the Curragh as an assembly point and for this reason the Curragh is an outstanding place of ecological heritage in European terms and there is a code of management for its use.”

The Curragh has many users, the Department of Defence who manage the area on behalf of the State, the horseracing fraternity, the farmers whose sheep graze the Curragh and the people of Kildare and Ireland who walk, cycle and enjoy the scenery on the Curragh.

Dr Feehan says that the Curragh should be designated as a Special Area of Conservation (SAC) under the European Habitats Directive. “This would force those responsible for the Curragh to do what is necessary to protect the Curragh or else face European Court sanction.”

Sr Rita Minehan of the Brigidine sisters said that arising from the walk and following Dr Feehan’s comments a group is being formed to get action on proper care of the Curragh.

“We want the area conserved the way it should be and we are putting together a group of people who believe strongly about the ecological importance of the Curragh of Kildare.”