In a significant announcement, Pope Francis has named six leaders of women’s religious orders, a consecrated laywoman and the superior of the De La Salle Christian Brothers as full members of the Congregation for Institutes of Consecrated Life and Societies of Apostolic Life (CICLSAL). This is the Vatican department that oversees religious life.

Previously, the members of CICLSAL were all men, ie cardinals, bishops and several priests who were superiors of large religious orders of men.

A result of these appointments means that now, for the first time, women will have a say over directions of this Vatican department which has influence in the life of women and men religious around the world.

Given that more than half of the world’s 1.3 billion Catholics are women and the membership of female religious orders is about three times larger than that of male orders this announcement is far from too soon and offers women some glimmer of hope.

To read more about this news, including the names of the women appointed,  go to: 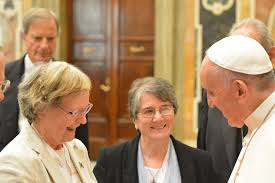