“Old Age is a Time of Grace”

On the eve of his 83rd birthday this month, Pope Francis met with members of the Italian Association of Senior Workers and is reported as saying to them that “Old age is a time of grace”.

Pope Francis told association members that one’s later years should be a “season of dialogue,”  because “the future of a people naturally presupposes a dialogue and encounter between the old and young to build a society that is more just, more beautiful, has more solidarity and is more Christian”.

“The elderly, the grandparents, have a unique and special ability to understand the most problematic situations,”  the Pope continued. “And when they pray for these situations, their prayer is strong, it’s potent.”

By living one’s senior years as a gift and a time for dialogue, he said, the elderly show the lie of “the traditional stereotype of the elderly: ill, handicapped, dependent, isolated, besieged by fear, left out, having a weak identity after losing their social role.”

Active seniors, he said, also fight a system that focuses more on “costs and risks” than on “resources and potential.”

“The future will be found in dialogue between the young and the old,” he said.

“Remember, talk to young people, not to clobber them, no. To listen to them, to sow something. This dialogue is the future.” 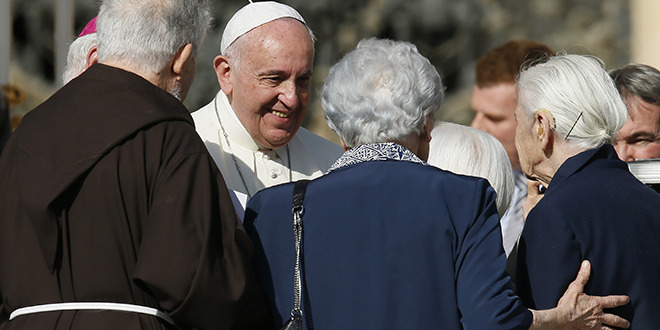 Pope Francis greets people during an encounter with the elderly in St. Peter’s Square at the Vatican