Prayer for World Day Against Trafficking in Persons

This World Day on 30 July was established by the United Nations General Assembly to raise awareness of the situation of victims of human trafficking and for the promotion and protection of their rights.

We know that every country is affected by human trafficking – as a county of origin, transit or destination for victims.

“Trafficking in persons is a vile rime that feeds on inequalities, instability and conflict. Human traffickers profit from peope’s hopes and despair. They prey on the vulnerable and rob them of their fundamental rights.

Children and young people, migrants and refugees are especially susceptible.

Women and girls are targeted again and again… Human trafficking takes many forms and knows no borders. Human traffickers too often operate with impunity, with their crimes receiving not nearly enough attention. This must change”. (UN Secretary General Antonio Guterres, 2018)

On this day, let us renew our commitment to work to raise awareness and take action on key issues of prevention, protection and prosecution to eliminate this crime. 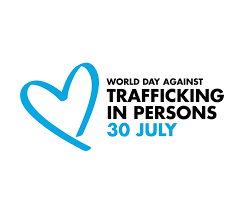