On 9th July, Brigidine Sisters remember and celebrate their Founder, Daniel Delany. Daniel was born to Daniel and Elizabeth Delany (nee Fitzpatrick) in Paddock, County Laois, in the Diocese of Ossory in 1747. The families of both his parents were wealthy farmers, unlike the majority of Catholic families of that time in Ireland.

At the age of sixteen, Daniel decided to become a priest. With the help of a good Protestant friend he was smuggled out of the country to a college in Paris to begin his studies for the priesthood. He earned a reputation for his intellectual brilliance and his marked sensitivity of disposition. In 1770, Daniel Delany was ordained.

He returned to Ireland, disguised as a layman since priests were outlawed. Early Brigidine writings tell us that Daniel was shocked at the conditions that still prevailed in Ireland. Destitution, violence, lawlessness and crime were rampant throughout the country. There was widespread agrarian unrest as millions of landless poor struggled for the rights and privileges of practical ownership. The country was still fettered and unfree despite the relaxing (but not total lifting) of the penal laws. He was so appalled at the state of Ireland that he was tempted to return to France. However, his mother prevailed on him to stay in Ireland.

To read more on Daniel Delany’s story and the early history of Brigidines  go to From the Acorn to the Oak.

His first appointment as priest curate was to Tullow at the end of 1777. The social and political conditions that prevailed in Tullow were harsh and intimidating. Crime, violence and vice flourished in Tullow and in the surrounding areas. In response to these conditions, he organised Sunday school for adults as well as children. He tried sermons and house-to-house visitation. He enlisted the help of the wives and mothers in trying to remedy some of the deplorable behaviour in the parish. He didn’t meet with much success, so he turned his attention to the youth.

Daniel gathered some children and started a choir, teaching them to sing at Mass and at Vespers. From hymn singing he progressed to prayer and religious instruction. He taught the more gifted to play the whistle and flute and he started an amateur band. He initiated catechetical classes for first communicants and those preparing for confirmation. Music and singing attracted both children and adults to the chapel. The numbers for instruction grew and the beginnings of a Sunday School system took shape.

As the youth learned to sing and read, they acquired a new sense of dignity and classes were formed. The numbers increased so much so that Daniel Delany had to enlist the help of young women and men whom he trained with great care. Before long, students of all ages, both single and married, were attending Sunday school. The parish of Tullow was slowly being transformed. Daniel Delany was curate for only six years when he was appointed coadjutor to Bishop O’Keeffe in 1783.

Bishop Delany’s vision of providing secular as well as religious education for his people, “rich and poor alike,” impelled him to explore the possibilities of founding a religious order.  In 1807 he founded the Congregation of St Brigid (Brigidine Sisters). In doing so he spoke of his dream of re-founding the Order of St Brigid of Kildare. In 1808 he founded the Patrician Brothers.

Members of each of these Congregations continue to live and minister in different countries around the world and draw inspiration from his life and example. 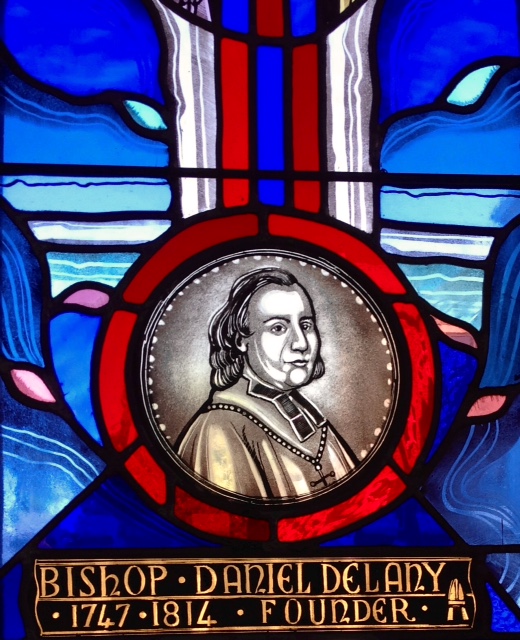 Window in the Parish Church, Tullow